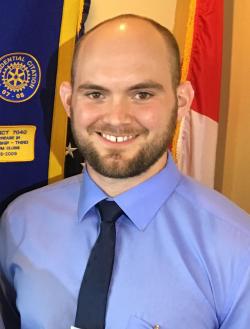 During the ceremony, Becky J. Tessier of Massena was installed as president-elect and Taylor Robertson of Parishville was elected and installed as a new board of directors member. Continuing on the board are Shawn Seymour of Hannawa Falls, treasurer; Romeyn Prescott of Potsdam, secretary; and Carol Hunter of Hannawa Falls, director.

LaShomb graduated from Norwood-Norfolk Central School in 2008 and from SUNY Potsdam in 2012, where he received a bachelor of science degree in business administration with a minor in music business.

After graduating from college, LaShomb worked locally at entry-level positions and then moved to New York City. It was not long before he decided Potsdam was his home, and he started with Community Bank N.A. in 2015. There, he advanced from Electronic Banking, through Trust Services, to Commercial Banking.

LaShomb is a firm believer in community involvement and networking. He credits his success to his relationship with Rotary, the St. Lawrence Leadership Institute, and community support.

He looks to cultivate the growing number of professionals in the area through chairing the St. Lawrence County Young Professional Network. LaShomb also serves as the treasurer of the Potsdam Community Dog Park and as a committee member of the St. Lawrence Leadership Institute.

LaShomb is the son of Kimberly and John LaShomb Sr., and resides in Parishville with his partner and fellow Rotarian, Taylor Robertson.

The Potsdam Rotary Club meets each Wednesday at noon -- these days online.