POTSDAM - Clarkson University President Tony Collins has announced that Joshua Thomas has been promoted from assistant professor to associate professor of Physics in the School of Arts & Sciences and the Institute for STEM Education. Thomas is also the Director of the Reynolds Observatory. 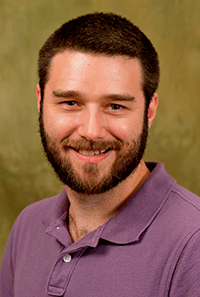 Joshua ThomasProfessor Thomas joined the faculty at Clarkson in the fall of 2012, where he teaches introductory physics and astrophysics. He concentrates his research on Stellar spectroscopy: binary stars, Be, and Wolf-Rayet stars, astrophysical disks and jets, laboratory astrophysics, numerical simulation, and image analysis.

Thomas has written academic articles and made numerous presentations and scholarly talks on his field over the years.

As an undergraduate, he participated in experimental atomic physics research, and numerical simulation of microlensing events, as well as simulating images of the star Eta Car using a Monte Carlo technique. In graduate school Thomas worked in the field of laboratory astrophysics, measuring laser-induced fluorescence of polycyclic aromatic hydrocarbons for comparison to observed photoluminescence in the Red Rectangle nebula. As a graduate student, he focused on the analysis of spectra on the star at the center of the Red Rectangle determining the origin of several interesting features in the observed spectra.