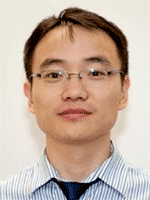 Incoming Clarkson University professor of Mechanical and Aeronautical Engineering Chunlei Liang will be teaching a course in numerical methods with applications.

“Numerical methods is his research area so he is a perfect fit for that class,” said Brian Helenbrook, Professor and Chair of Mechanical & Aeronautical Engineering and Paynter-Krigman Endowed Professor in Engineering Science Simulation. He said he is excited to have Liang at Clarkson.

The PECASE is the highest honor bestowed by the United States Government to outstanding scientists and engineers who are beginning their independent research careers and who show exceptional promise for leadership in science and technology.

“It certainly helps with the stature of our program. He has a strong track record of bringing in grants, and he is excited to work with the other faculty to collaborate and even accelerate that. That is exciting for us,” Helenbrook said.

Liang has successfully directed eight Ph.D. dissertations and three master’s theses while at George Washington University and maintains a project website for his National Science Foundation (NSF) career grant at sites.google.com/site/chorusmhdopensourceproject. His research group began their work on Aug. 1.

Established in 1996, the PECASE acknowledges the contributions scientists and engineers have made to the advancement of science, technology, education, and mathematics (STEM) education and to community service as demonstrated through scientific leadership, public education, and community outreach. The White House Office of Science and Technology Policy coordinates the PECASE with participating departments and agencies.