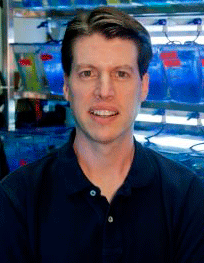 Within the lumen of the digestive system where food passes, there is a layer of cells that regulates nutrients entering the body. As these cells are continuously exposed to harsh digestive enzymes and mechanical abrasion, they constantly turn over. Constant turnover is accomplished by having multiple stem cell compartments throughout the intestine that produce replacements over the life of the organ.

Zebrafish are a common aquarium fish, which are small and easy to care for and the embryos develop rapidly in an external environment. While fish may seem an unusual vertebrate to investigate the human condition, zebrafish share more than 70 percent of their genes with humans, making them an excellent system to study both the development and origins of disease. Understanding of the genes and mechanisms involved in the formation and regulation of the fish’s intestinal stem cells will provide information about how human intestinal stem cells are regulated.

Wallace received a PhD in Molecular Genetics from The Ohio State University and was a postdoctoral fellow at the University of Pennsylvania. Wallace has been a Clarkson faculty member since 2004. He has also previously received additional competitive grants from the National Institute of Health and the National Science Foundation.