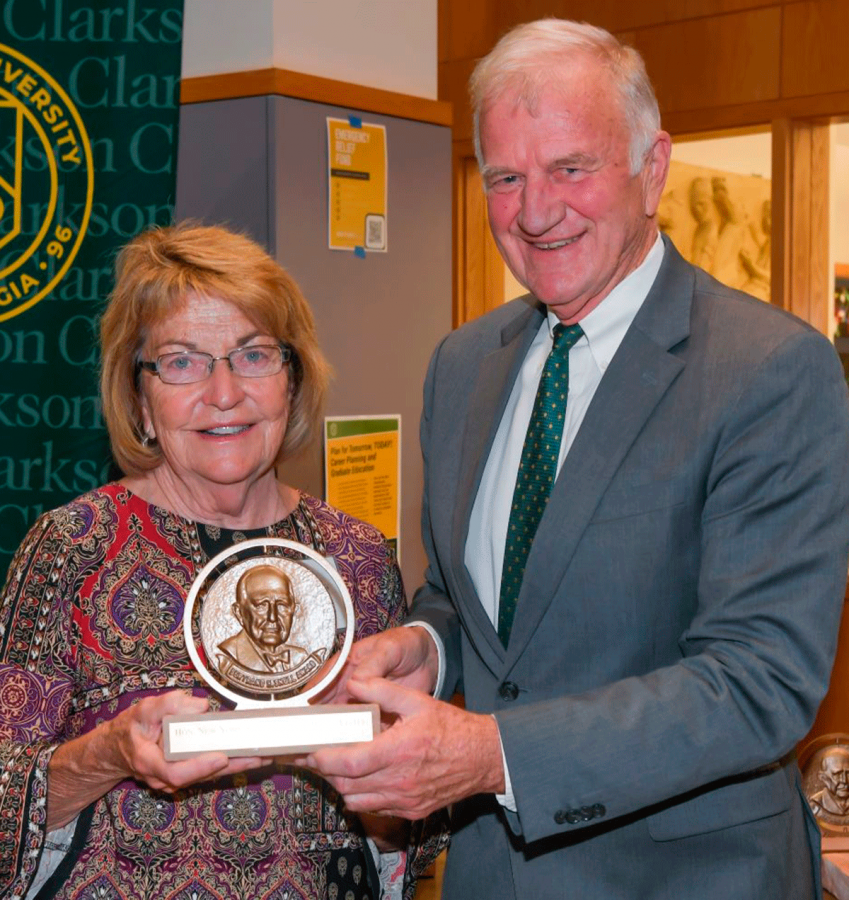 Senator Betty Little retired from elected office after completing her ninth term representing the residents of the 45th Senate District, which comprises Clinton, Essex, Franklin, Warren and parts of St. Lawrence and Washington Counties. Prior to first winning election to the state senate in November 2002, Senator Little served in the New York State Assembly for seven years.

“In a quarter-century as a state representative, Betty Little earned a reputation as go-to person from the North Country who worked hard for the benefit of the citizens she represented,” said Tony Collins, President of Clarkson University. “As a true friend to the region, Betty has an extensive list of accomplishments. She was a strong supporter of veterans’ issues, led the drive to lower property taxes, helped businesses within the Blue Line of the Adirondack Park to balance the ups and downs of the tourism economy and was a leader on local environmental issues. Her successes will positively impact the citizens of this region for generations.”

At the state level, Little served as the ranking minority member on the senate’s Education Committee. She also sat on committees for Cultural Affairs, Tourism, Parks and Recreation; Environmental Conservation; Finance; Health; Housing, Construction and Community Development; New York City Education; and Rules. During her tenure, she sponsored several successful amendments to the New York State Constitution to assist residents, the economy and the environment in the Adirondacks.

The mother of six children, including an active-duty combat veteran, Little was known as a strong voice for veterans at the state capital. She sponsored Patriot Plans I and II, which expanded benefits and services available to New York’s military personnel and their families. She also sponsored a law designating the Adirondack Northway, I-87, the “Adirondack Veterans Memorial Highway” in honor of all New York veterans who have served the country. For her advocacy on behalf of armed services men and women, she was presented the Mary G. Roebling Distinguished Service Award in 2011 by the Association of the United States Army First Region.

Little has been recognized with numerous awards and distinctions during her years of public service. In 1992, she was awarded the prestigious Liberty Bell Award for Community Service and in 1997 she was presented the Adirondack Girl Scouts’ Women of Distinction Award. In 2000, Little received the Public Service Sector Partnership Award from the Adirondack Regional Tourism Council. In 2005, she was recognized as Legislator of the Year by Families Together in New York State for her advocacy on behalf of families with children suffering from emotional and behavioral disabilities. Little has also been recognized by the New York State Economic Development Council, the New York State School Boards Association and the New York State Farm Bureau.

Born in Glens Falls, NY, Little earned her bachelor’s degree in elementary education from the College of Saint Rose in Albany, NY. In 2007, the proud grandmother of 18 was awarded an honorary doctorate by her alma mater. She also received an honorary civil law degree from Paul Smith College in 2019.

Little along with Garry F. Douglas, long-time President and CEO of the North Country Chamber of Commerce; Kate Fish, retired executive director of the Adirondack North Country Association (ANCA); Ellen Rocco, longtime station manager for North Country Public Radio (NCPR); and the St. Lawrence County Public Health Department, including former Director Dana McGuire and Interim Director Jolene Munger were honored at a ceremony during dinner with the Board of Trustees on October 15 in the Caporali Atrium in Snell Hall on Clarkson University’s Hill Campus. The Bertrand H. Snell award honors Congressman Snell's service to the community, Clarkson and the nation. It was created by the University's Board of Trustees in 1981 to assure the remembrance of Clarkson’s patron while recognizing a new generation of leaders who share his commitment to the University's greater community. Recipients of the award are chosen for their professional, business or educational accomplishments, combined with demonstrated integrity and concern for the community. To learn more about past award recipients, click here: https://www.clarkson.edu/snellaward