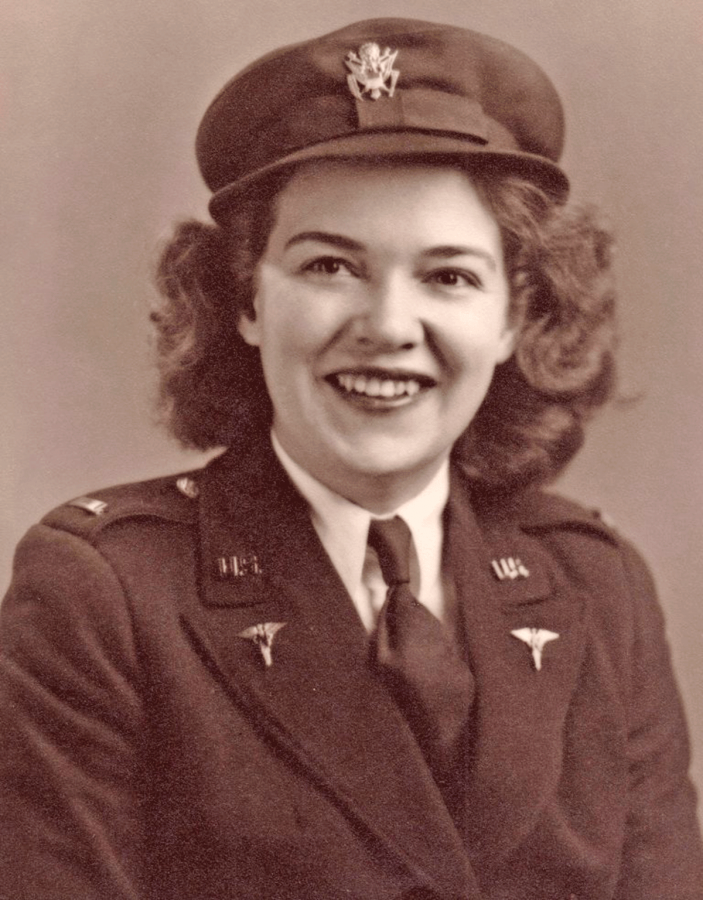 This photo shows Marjorie Rock as a U.S. Army Nurse Corps Second Lieutenant in 1942. She retired from the Army as a Lieutenant Colonel in 1970 and made St. Lawrence County her home until her death in 2017.

HEUVELTON -- A new charitable fund from a late former U.S. Army nurse is giving its first grant to the Heuvelton Historical Association to support the restoration of Pickens Hall, an entertainment venue in Heuvelton.

St. Lawrence County resident and retired Lieutenant Colonel of the United States Army Marjorie J. Rock, who passed away in February 2017 at the age of 96, established with a bequest the Rock Charitable Fund with the Northern New York Community Foundation.

The Rock Charitable Fund board of advisors recently recommended its first grant award of $100,000 to the Heuvelton Historical Association to support Pickens Hall restoration, particularly the ongoing preservation of the third floor opera house. Built in 1856, Pickens Hall is listed on the National Register of Historic Places.

According to the announcement from the Northern New York Community Fund, Marjorie Rock grew up in St. Lawrence County and graduated from Heuvelton High School in 1937. In 1941, she graduated from the three-year nursing program at Flower Fifth Avenue School in New York City. The following year, she joined the U.S. Army Nurse Corps, serving in North Africa and Italy during World War II. After the war, she attended Teachers College at Columbia University where she earned a bachelor of science degree in 1948 and a master of arts in 1950.

She spent six years teaching in nursing programs in Connecticut and New York City before returning to active Army service in 1954 to assist with medical courses for enlisted personnel. She helped to establish a medical education system, particularly in the United States, Japan and Germany. She served as a supervisor, chief nurse, instructor and director of an advance medical technician school. Her last overseas duty was in Vietnam.

In 1970, she retired from the Army as a Lieutenant Colonel and returned to St. Lawrence County, joining her mother in Ogdensburg to help with her care.

She earned many honors during her Army service, including the Bronze Star and Army Commendation Medal. Her only sibling, a brother, was killed in 1944 while piloting a fighter plane over Normandy.

For the rest of her life, Rock made St. Lawrence County her home, and traveled with friends, cared for others, and helped her church and other organizations, including the Army Nurse Corps Association and other veterans’ groups. She maintained a keen interest in documenting local history and furthering the education of others in the county.

“We are extremely honored to be part of the special way Marjorie’s passions and interests will benefit in perpetuity,” said Rande Richardson, Community Foundation executive director. “Her incredible thoughtful generosity will have an enduring impact on the places and people of St. Lawrence County, not just one year, but forever. This is a transformative gift for the region,” he said.

The Community Foundation and a board of advisors will administer the permanent charitable legacy fund. Grant funding will be awarded annually to qualified nonprofit organizations whose missions and efforts align with the fund’s objectives. This year, up to $100,000 in grant funding will be made available.

Eligible nonprofit organizations are encouraged to apply for grant funding later this year through the Rock Charitable Fund of the Northern New York Community Foundation. More information about the application process will be released in coming months, with grants anticipated to be awarded by the end of 2020.