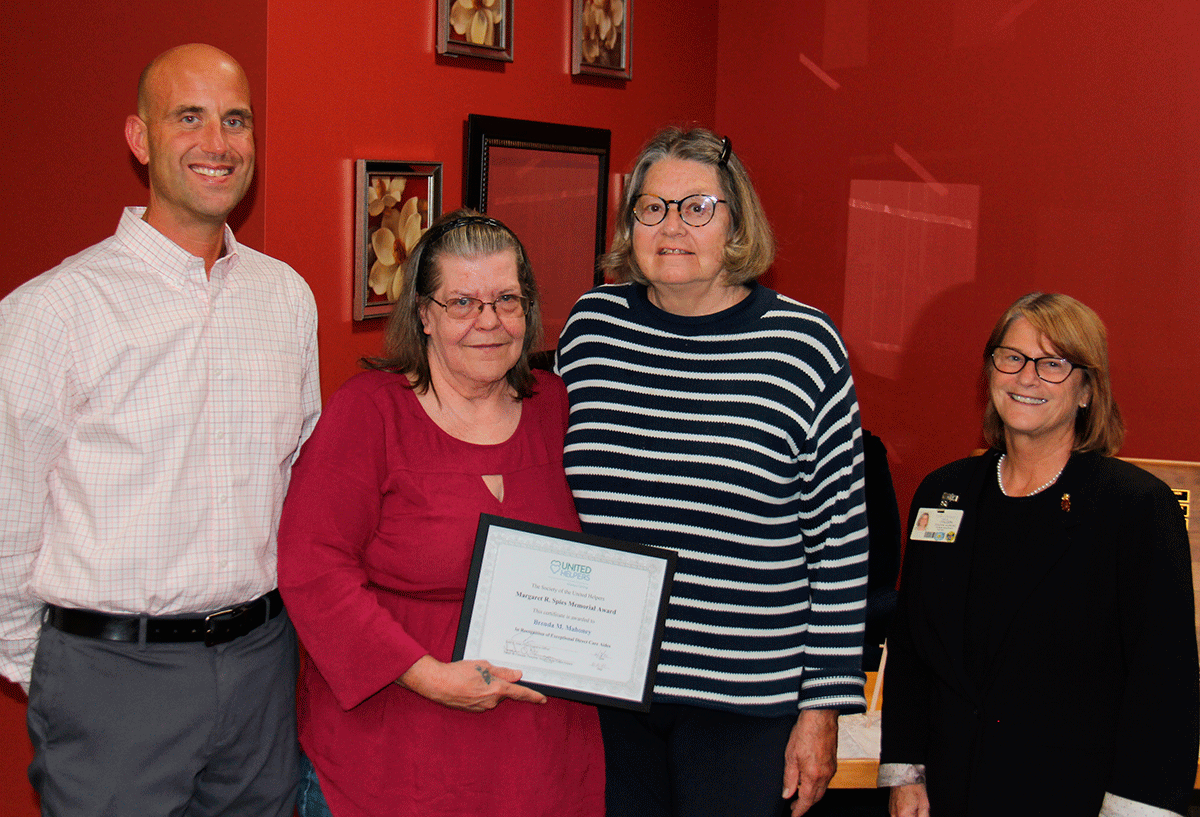 This year’s recipient of the Margaret R. Spies Award from United Helpers Behavioral Health and Life Skills is Brenda Mahoney of Canton. Ms. Mahoney is a cook and direct support professional who works at the Rensselaer Falls IRA. From left, Program Leader Paul Linden, Ms. Mahoney, Ann Spies, who created the award in memory of her mother, and BHLS Director of Residential Services Colleen Aldridge. 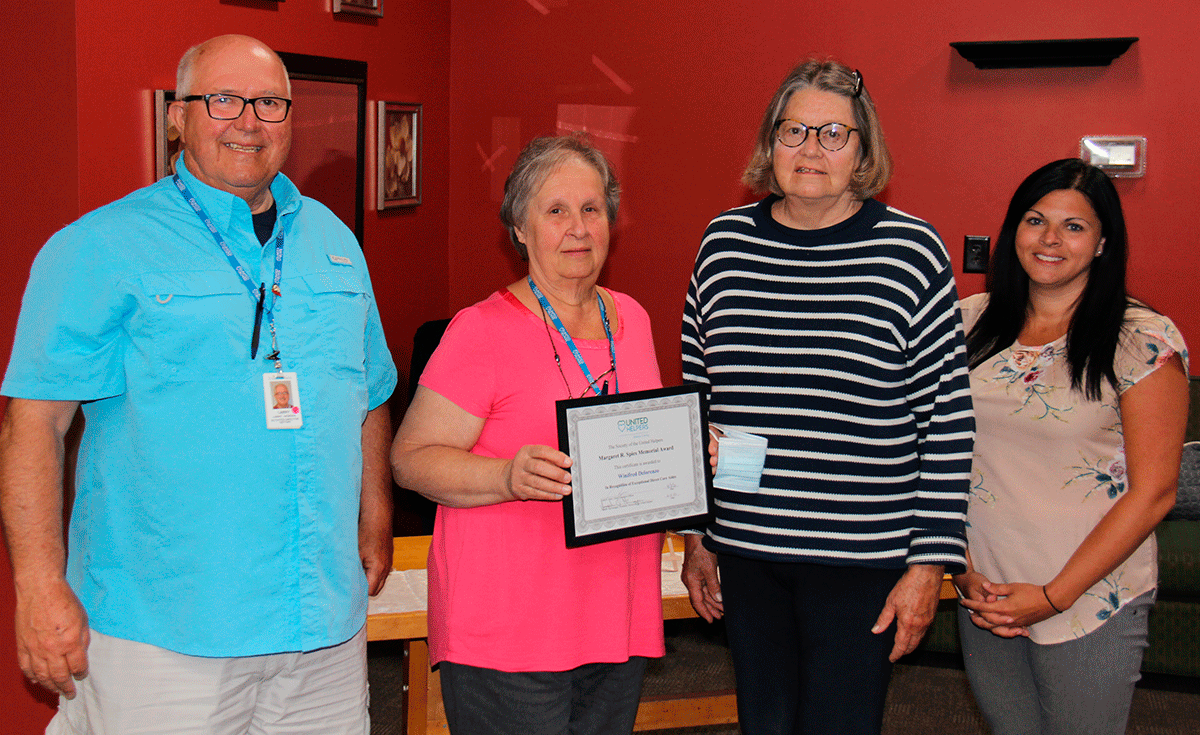 This year’s recipient of the Margaret R. Spies Award from United Helpers Rehabilitation and Senior Care in Ogdensburg is Winnie DeLorenzo of Depeyster. Mrs. DeLorenzo is a CNA/Activities Aide. From left, Activities Leader Larry Worden, Mrs. DeLorenzo, Ann Spies, who created the award in memory of her mother, and RSC Ogdensburg Vice President of Operations Brittany Thornton. 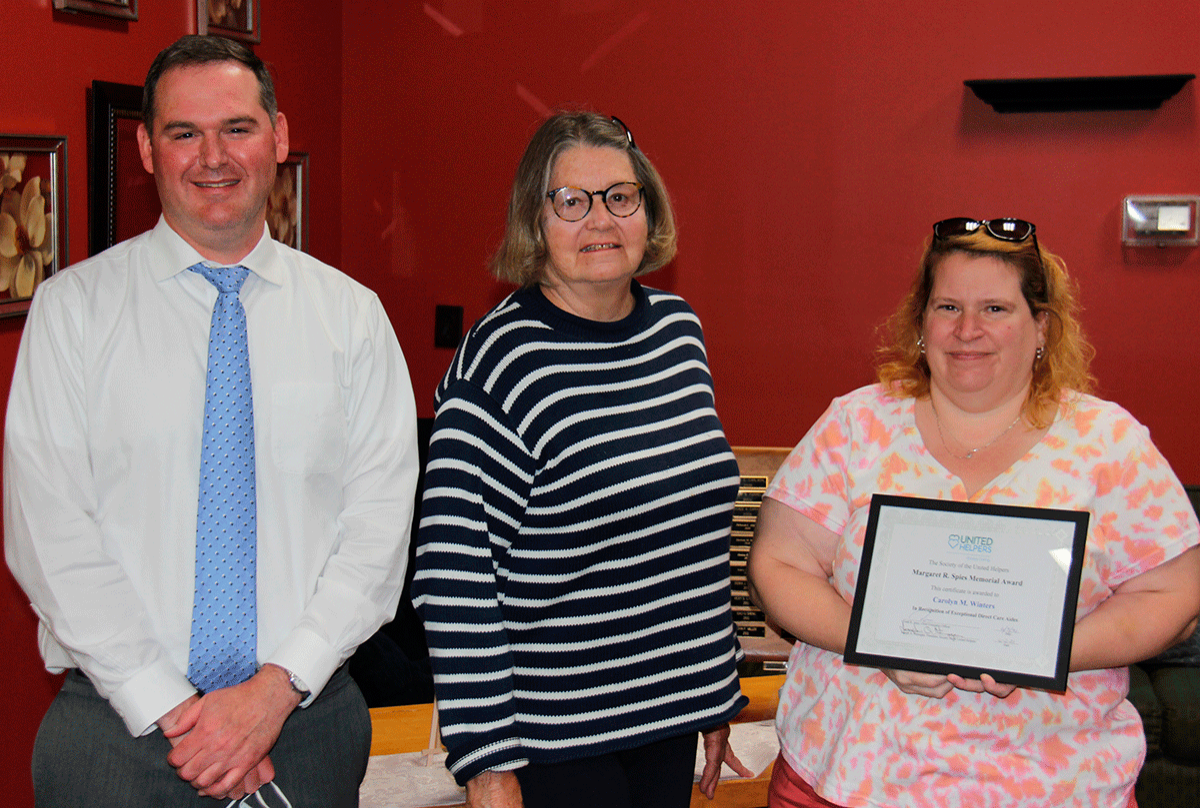 OGDENSBURG – When United Helpers CEO Todd Amo spoke at the organization’s recent Margaret R. Spies Award presentation, he noted it was a shame that they could only honor three employees with these awards, as the organization is filled with people deserving of the honor.

“The award is only given to three employees out of more than 800,” Mr. Amo said. “While there are many more deserving of recognition, these three did rise to the top.”

This year’s awards went to Winnie DeLorenzo, a Certified Nursing Assistant (CNA/Activities Aide) in Ogdensburg; Carolyn Winters, a CNA in Canton; and Brenda Mahoney, a cook/direct support professional at the Rensselaer Falls IRA (Individualized Residential Alternative), each of whom were nominated by their peers for the honor.

United Helpers Rehabilitation and Senior Care Vice President of Operations Brittany Thornton said that this year their facility received more than 40 nominations for the award, although she noted more than a dozen of them were for Mrs. DeLorenzo, who has been employed by United Helpers for 37 years.

Mrs. Thornton said the most recognizable thing about Mrs. DeLorenzo is her voice.

“On most any day, you can open the door to a neighborhood and hear her singing, “You Are My Sunshine” to the residents. She has a very calming effect on them, as well as on her co-workers.

Timothy Parsons, who serves as Vice President of Operations in Canton, where Ms. Winters works and serves as a mentor, said that while he does not know Ms. Winters all that well, there were several things about her nomination that stood out.

“Carolyn is a night shift CNA, which is impressive. Given that nominations come from your peers, sometimes our night shift staff might be overlooked for these honors. The very fact that she was nominated as a night shift employee shows how impressive a CNA she is,” he said.

Staff Development Specialist Robin Leonard was among those who nominated Ms. Winters for the honor.

“I have watched new employees who completed orientation with Carolyn. They often mimic her standards of care and compassion,” Ms. Leonard said. “This shows me that she is an excellent teacher, and someone who takes great pride in her work Not only is Carolyn a model CNA, but she also demonstrates the true meaning of integrity.”

While Brenda Mahoney’s job may primarily be working as a cook, she is also trained as a Direct Support Professional; and Program Leader Paul Linden said this year’s winner from Behavioral Health and Life Services is far more than someone who simply prepares meals.

“Brenda always puts others first and is always ready to go out of her way to help anyone,” Mr. Linden said. “She provides residents with care, concern, and love, along with the occasional laugh that every one of our residents deserves and enjoys.”

A plaque that lists the names of all the Spies Award recipients hangs at United Helpers Rehabilitation & Senior Care in Ogdensburg. With the pending closure of that facility, the plaque will be moved to another United Helpers location where it can continue to memorialize Mrs. Spies and honor the awards’ recipients.