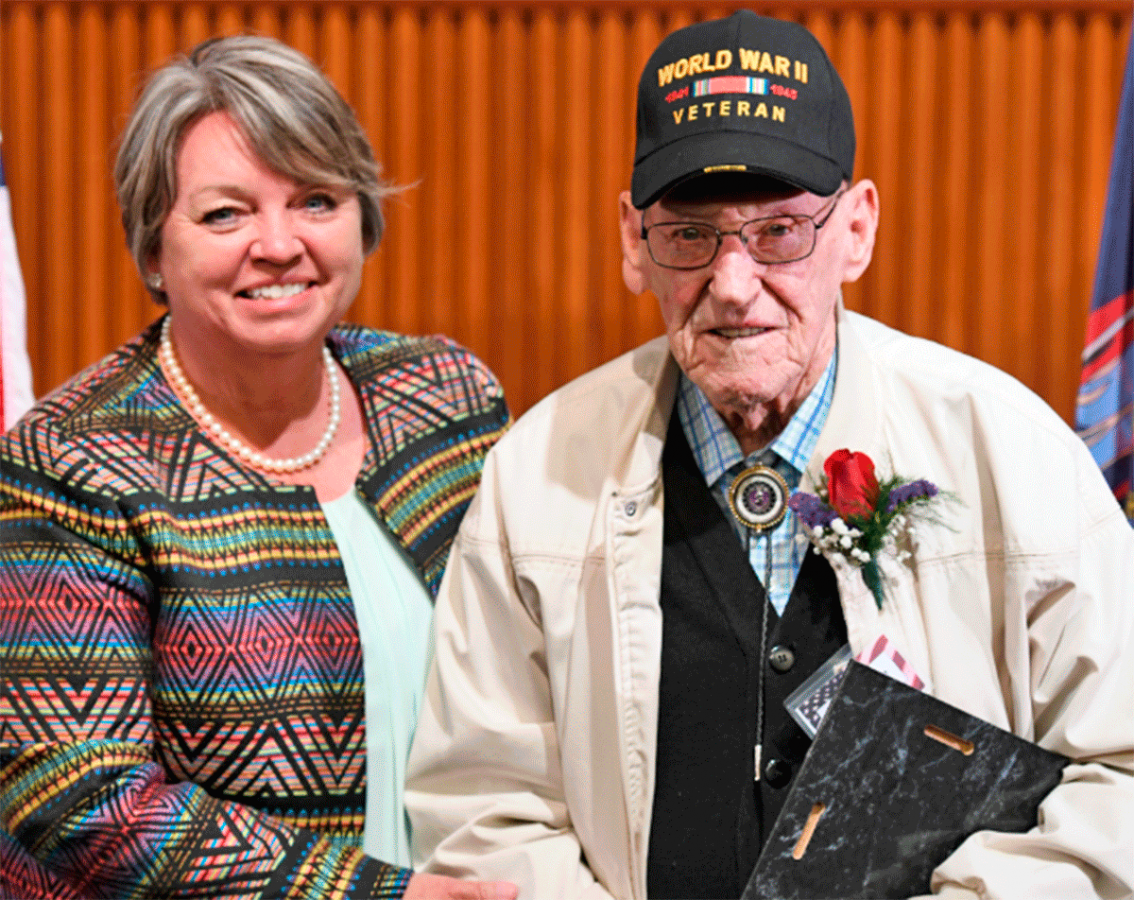 Sen. Ritchie presents World War II veteran Major Glenn Dodge with a plaque commemorating his induction into the NYS Senate ‘Veterans’ Hall of Fame’ at a special ceremony in Albany. The photo was submitted by NYS Senate.

OGDENSBURG -- Major Glenn Dodge, a 101-year-old WWII veteran, was officially inducted into the New York State Senate’s "Veterans' Hall of Fame" during a special ceremony in Albany May 21.

He was nominated by Sen. Patty Ritchie, R-Heuvelton, for his service and sacrifice, as well as his work to improve his community,

A resident of the Jefferson County Village of Chaumont, Glenn Dodge was born in Ogdensburg in 1917. After earning his degree from Potsdam Normal School in 1937, he began teaching classes in a rural schoolhouse on the St. Lawrence River’s Grindstone Island. He would teach those classes until 1941, when he joined the United States Army.

Dodge served in World War II with the 28th, 317th, and 333rd Infantries from 1941-1945. His service is highlighted by his roles in both the Battle of the Bulge and helping to secure Odeigne, Belgium. He is credited with leading a reconnaissance patrol deep into enemy territory and directing the capture of 18 Germans. From these individuals, he gained information important to future operations and helped secure a large quantity of enemy weapons.

After active duty, Dodge joined the Army Reserve, where he would serve until his retirement in 1967. His military awards include the pre-Pearl Harbor Atlantic Defense and European Service Awards, Purple Heart, Bronze Star for Valor and the New York State Distinguished Service Medal.

“Major Glenn Dodge is the perfect example of why those who served our country during World War II are referred to as the ‘Greatest Generation,’” said Ritchie.

“Not only did he bravely—and proudly—serve his country as a member of the United States Army, he has dedicated his post-service life to the betterment of his community, and impressively, at 101 years of age, he continues to make a difference today. Words cannot express how grateful we are for his service, and I am extremely proud that he’s one of the newest members of the New York State Senate’s 'Veterans' Hall of Fame.’”

Following his military service, Dodge returned to teaching, a career that he retired from in 1973. He is thought of around the North Country as the epitome of a public servant who throughout the years has dedicated countless hours to a number of local organizations.