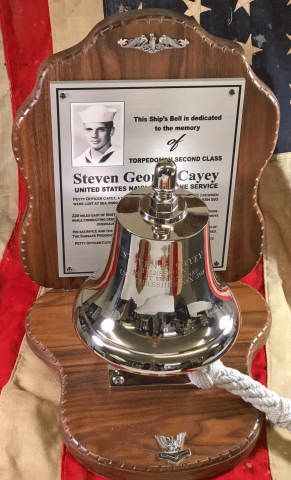 A ship’s bell memorializing a Potsdam High School graduate who died in the sinking of a U.S. Navy submarine in 1963 has a place of honor in the Potsdam Public Museum. Steven George Cayey (1939-1963) graduated from Potsdam High in 1957. He joined the Navy and served on the USS Thresher, a nuclear submarine which sank April 10, 1963 in 8,400 feet of water 220 miles off the coast of Massachusetts. All 129 crewmen aboard including Torpedoman Second Class Cayey perished. Steven’s sister Diane (Cayey) Anderson of Alabama donated the memorial bell to the Potsdam Public Museum. Read more here.