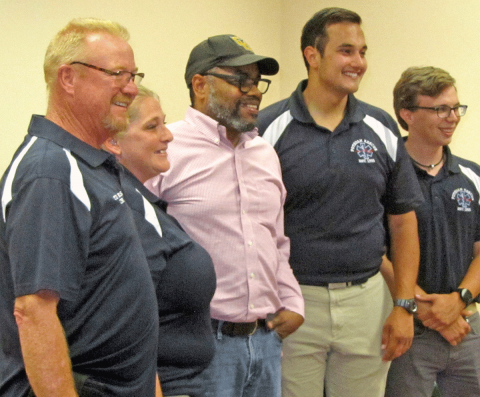 Members of the Potsdam Volunteer Rescue Squad and the Potsdam Police Department were honored Thursday at a Civic Center ceremony for their efforts in two medical 'saves' in recent months. On Aug. 2, Paul Cole, 55, a veterinarian with the US Department of Agriculture, was at his Pleasant Street home when at about 11 a.m. he collapsed. Rescue Squad Chief Tim Rivers, EMT Agee, and student EMT Bellucci responded and began work. 'He coded four times,' Rivers said, and they revived him each time. Cole said he did not comprehend what was happening at the time. He said he could see at one moment and then he was out again. Cole was taken to C-PH and then to Plattsburgh, was treated, and released the following Monday. Above is Paul Cole, center, with Potsdam Rescue Squad members Chief Rivers, EMT Agee, and EMTs Bellucci and Jaremczek.