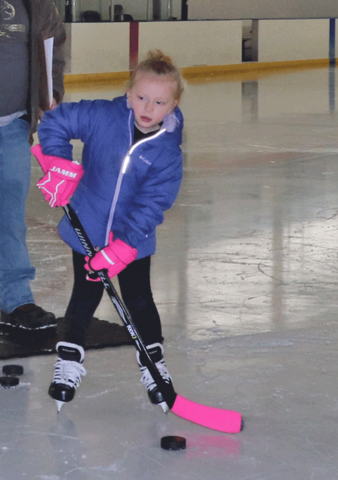 Ailee Paige Scovil of Parishville tries out her hockey skills at the Potsdam Elks Hockey Shoot at Pine Street Arena on Monday. She was one of dozens of competitors ages 13 and under who took five shots at a skills net, hoping to win hockey equipment or Clarkson hockey tickets. The event kicks off a week of free skating at Potsdam’s arena, sponsored by the Potsdam Elks Lodge. Free public skating for the community is from 1:45 to 2:45 p.m. Tuesday through Friday this week during school vacation. NCNow photo by Cheryl Shumway.