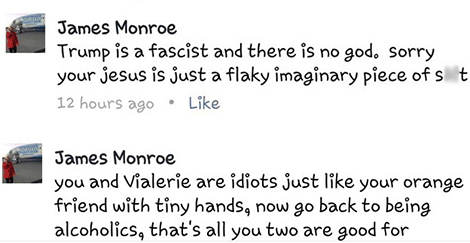 Democratic candidate for St. Lawrence County District Attorney Jim Monroe is refusing to confirm whether he wrote a Facebook post in which he allegedly refers to Jesus as 'a piece of s**t' and Donald Trump as a 'fascist.' This screenshot shows Facebook comments allegedly made by district attorney candidate James Monroe. See story for more details.