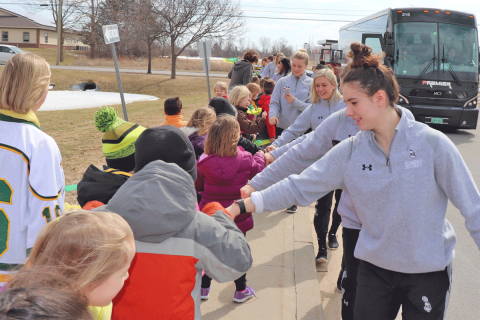 Potsdam middle and elementary school students gave the Golden Knights Women’s Hockey team of Clarkson University a sendoff at noon Wednesday as they head to the Frozen Four NCAA Division I Women’s Championship. They face off against Wisconsin on Friday at 7 p.m., and the winners of the semi-final round will play Sunday at 2:30 p.m. in Hamden, Connecticut. This is the team’s fifth appearance in the Frozen Four. NCNow photo by Cheryl Shumway.