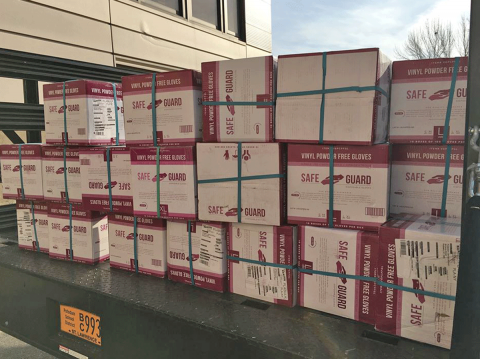 Potsdam Central School donated about 20 cases of latex gloves to Canton-Potsdam Hospital. 'Last school year, the school district ordered a supply of latex gloves for our food service and buildings and grounds department,' said PCS Superintendent Joann Chambers. 'We needed 40 boxes but accidentally ordered 40 cases. Rather than return the surplus, we decided to just store them, knowing we would need to use them all eventually.' When school officials heard personal protective equipment was needed at Canton-Potsdam Hospital, PCS was happy to be able to do their part, Chambers said. Photo courtesy of Potsdam Central School Facebook page.