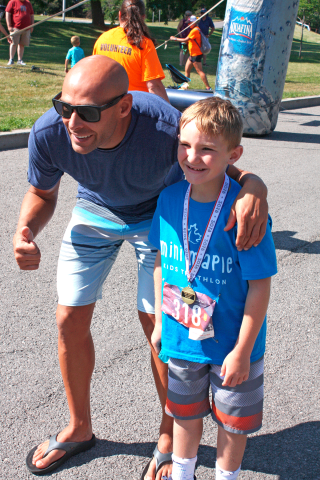 Pro Ironman Matt Russell, a Lisbon native, handed out awards at the Mini Maple Kids Triathlon in Ogdensburg recently. The event, which was hosted by CGSW Racing of Ogdensburg, drew 65 participants who were supported by a large number of family members. Russell is a professional triathlete who recently won Lake Placid Ironman. The participants in the Mini Maple Triathlon swam in the Ogdensburg City Bowl, bicycled on a closed course on Riverside Avenue and did their run on the Maple City Trail All of the youngsters, including Logan Smaciak, who is pictured above, received medals and the boy and girl age group winners received Maple Syrup hence the name of the event. North Country This Week photo by Dave Shea.