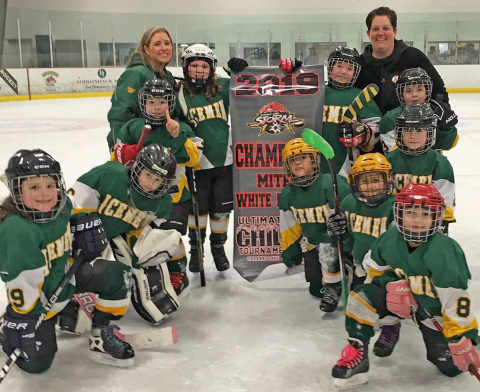 Norwood-Norfolk 8U Icemen won first place in the 2019 Ultimate Chill Tournament in Saranac Lake this past weekend. The champions Icemen are all 6 to 8 years old. Coach Amy Haught reports that the Icemen held a first place spot after three games, then went into a crossover game and won, moving them into the championship game which they won against Saranac-Placid. In the photo above, on the right side of the banner are Coach Haught, who sent us the photo, and players Emily McCarthy, Jonathan Schmidt, Alexis Haught, Claire Shoen. To the left of banner are Coach Michelle LaBier, players Peyton LaBier, Jesse DeRouchie, Bentley Mejia, Sawyer Petitt, Harley Mejia, Natalie French. Submitted by Amy Haught.