Shane Douglas, Justin Credible to wrestle at Fight for the Mind 5 'Extreme Halloween' in Massena 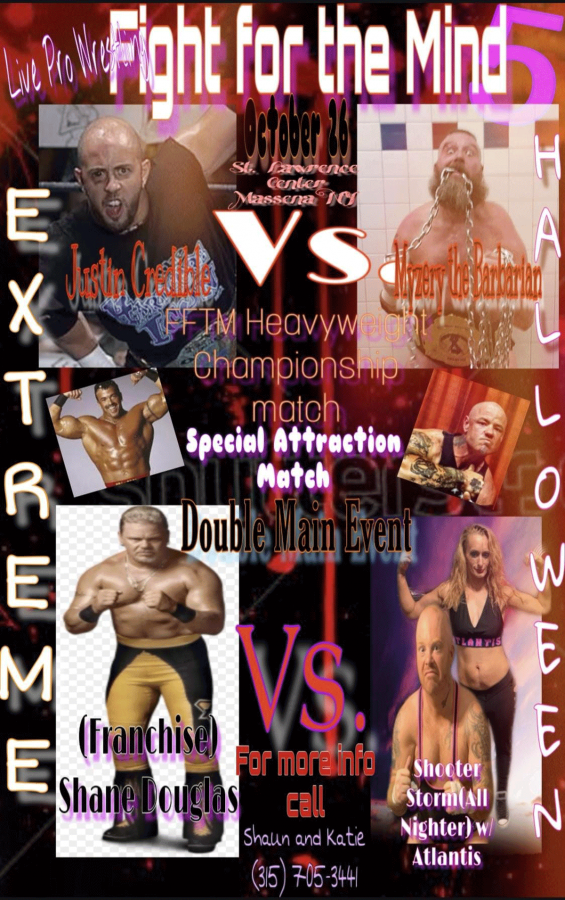 Graphic courtesy of Fight for the Mind on Facebook.

MASSENA — Fight for the Mind 5 “Extreme Halloween” is set to take place from the St. Lawrence Centre mall Oct. 26 and partial proceeds benefit Alzheimer's Association of the Northeast.

Promoter Shaun Balaban, who wrestlers under the name Shooter Storm, will take on "The Franchise” Shane Douglas in one of the featured bouts. Storm will be accompanied by his bodyguard and insurance policy “Atlantis” for this contest.

In the second main event, Fight for the Mind champion Myzery, will square of with Justin Credible for the belt. Credible has wrestled for many promotions over the years including WWE.

Former World Championship Wrestling star Buff Bagwell returns to Fight for the Mind and will face Massena’s own powerhouse Payne.

Tough Guy Inc., consisting of “Brutal” Bob Evans and “Tough” Tim Hughes, are also on the card and expected to be in tag team action. "

The Atlantic Championship Wrestling American title will be on the line.

“Firework” Foxx Vinyer, who has wrestled in Ring of Honor, is set to make his return to the North Country.

Balaban first started the event in memory of his mother, who passed away from dementia.

The matches will take place in center court, the same area where Santa Claus and the Easter bunny meet with children during the holidays.