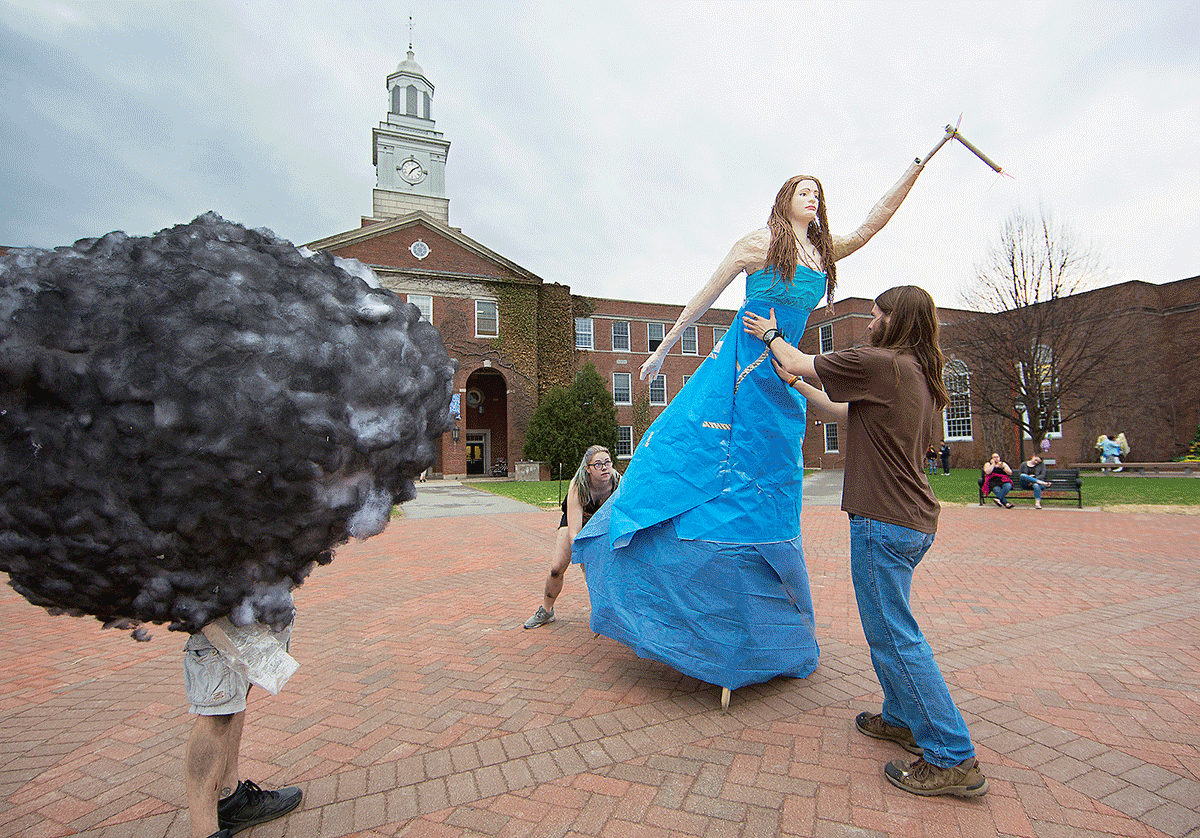 Seventeen artists from around the country & Denmark will infuse the campus and community with energy during the 2019 LoKo Arts Festival, which runs from Friday, April 26 to Sunday, May 5.

Most events are free, all are open to the public, and parking permits are not required during the festival.

The guest artist line-up includes several SUNY Potsdam alumni artists such as Mikaela Davis '14, a singer, songwriter and multi-instrumentalist who excels at the harp; Todd McGrain '83, a film director who will present his documentary "Elephant Path / Njaia Njoku;" and June Tyler '77, who will host a workshop on constructing handmade paper.

This year's festival will feature LoKo Downtown on Saturday, April 27, from noon to 5 p.m. in downtown Potsdam. Market Street will be closed to traffic as student bands, A cappella groups and dance ensembles perform throughout the afternoon. Hands-on art projects will take place at local businesses and food trucks will be on site throughout the afternoon.

"Elephant Path / Njaia Njoku" will be screened at the Roxy Theater, 20 Main St., on Monday, April 29 at 7:15 p.m. The documentary film tells the story of an American biologist, Bayaku tracker, a Bantu eco-guard and an Israeli security contractor who form an alliance to protect the last wild herd of forest elephants in the Central African Republic. A discussion with McGrain, the director, will follow after the film.

"From This Earth on Turtle's Back" is an off-campus event featuring internationally-known master storytelling duo Joseph Bruchac and Jessie Bruchac. The event will showcase Native American stories and music from the Iroquoian and Algonquin nations of the Northeast at the Potsdam Public Library on Sunday, April 28 at 4 p.m. Families and children are encouraged to attend this event.

Another highlight is a trio of Mohawk artists from Akwesasne who will make presentations about their traditional craft.

Carrie Hill will demonstrate the tradition of basket weaving using sweetgrass and black ash on Monday, April 29 at 2 p.m. in Kellas Hall.

Niio Perkins, a traditional clothing and beadwork designer, will make a presentation on how art and fashion can be used for social change on Tuesday, April 30 at 12:30 p.m. in Kellas Hall.

David Fadden, an accomplished painter, illustrator and storyteller, will talk about his experience growing up in a traditional Mohawk family full of artists, on Tuesday, April 30 at 7:30 p.m. in Snell Theater.

The Academic Quad will serve as the backdrop for the popular Festival of Light, which features illuminated sculptures, wearable art and interactive displays created by students. This year's Festival of Light will be held, rain or shine, on Tuesday, April 30, starting at 7 p.m.

The culminating concert at The Crane School of Music will feature the Crane Chorus and Crane Symphony Orchestra, presenting works by Paul Hindemith and Mozart under the baton of Conductor Kent Tritle, the 2019 Dorothy Albrecht Gregory Visiting Conductor.

To see the full schedule of events, visit www.potsdam.edu/loko.

Printed schedules are also available across campus and in the community.

North Country Public Radio is the media sponsor for the 2019 LoKo Arts Festival at SUNY Potsdam.