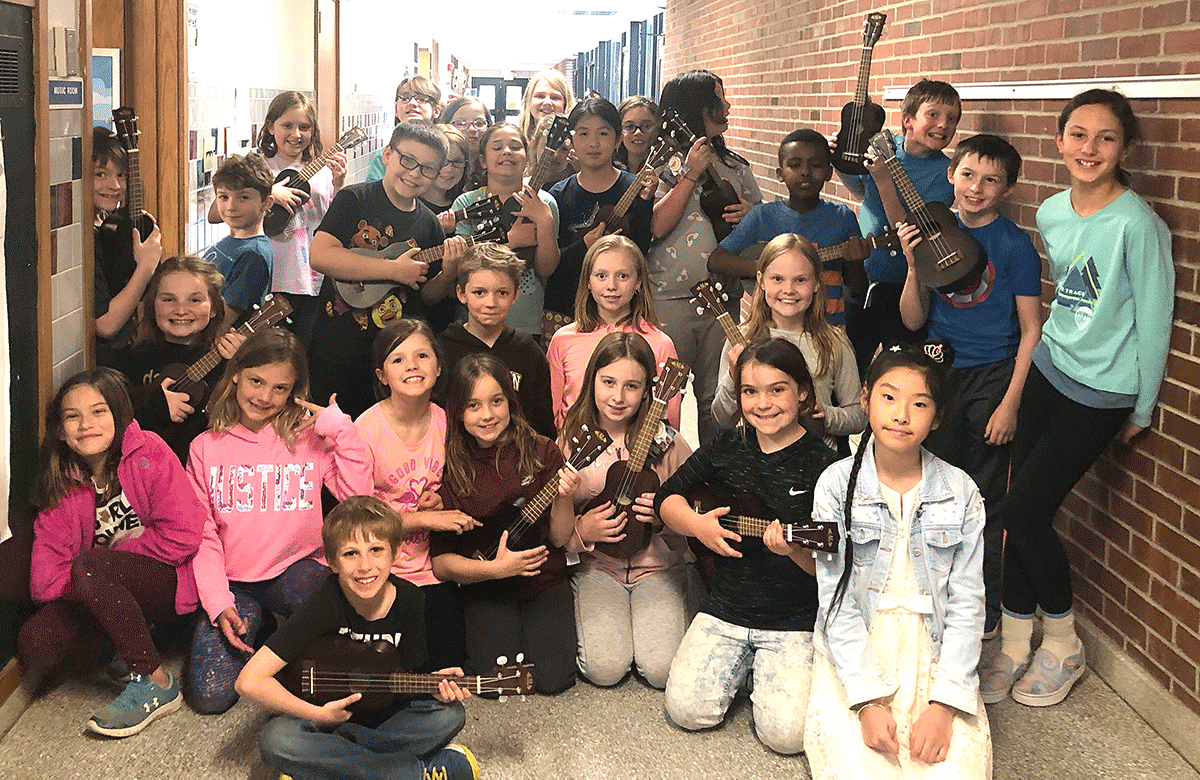 Above, are the Banford Strummers, about 30 Canton Middle School 3rd and 4th graders who are in the new ukulele orchestra, directed by Bridget Hall. The Willow Island concert will be their debut public performance. The outdoor concert by music groups for Canton Central School is scheduled for Tuesday, June 4, at 7 p.m., weather permitting, or Wednesday or Thursday, if original is postponed. The event, sponsored by Grasse River Heritage, is free and open to the public. Photo submitted by Varick Chittenden.

The concert will include performances by the high school Jazz Band, the Jazz Combo, and Vocal Jazz Ensemble and the Junior High Jazz Band. In addition, the evening will include the debut of the Banford Strummers, a new troupe of budding artists to make the Canton musical scene, said a press release from GRH.

The outdoor performances are scheduled for 7 p.m., Tuesday, weather permitting. Wednesday, the 5th, or Thursday, the 6th, are backup dates, if the Tuesday concert is postponed.

The Jazz Band and Combo from Canton High School, under the direction of Tim Savage, and the Junior High Jazz Band, an ensemble composed of students in grades 5 to 8 directed by Robert Bickford, will present a variety of music from classic big band swing charts to modern rock and funk. These groups perform frequently for community events and give award-winning performances in regional and state competitions.

The Canton Central School Vocal Jazz Ensemble, directed by Kimberly Busch, is a select group of high school musicians who perform repertoire from the American songbook, Broadway, and jazz standards. They perform school concerts as well as for community groups such as the St. Lawrence County Historical Association, the Rotary Club, and the Red Hat Ladies.

This year the school is introducing a new ukulele ensemble at the elementary level and this will be their first public performance. New elementary music teacher Bridget Hall has assembled “The Banford Strummers,” a group of around 30 musicians who were selected from the third and fourth grades to participate.

“The students’ enthusiasm for music is apparent as the energy they bring to their performances is palpable. They are ready and excited to rock the island in June,” said Bickford.

“We’re excited and pleased that the Canton Central School music department has offered to present one of their concerts on Willow Island this spring,” said Louis Tremaine, GRH president. “This event is one of several in the works, part of our organization’s process for collaborating with the Village of Canton to develop a master plan for possible future uses of the island as an arts park, with a venue for music and theater presentations as well as the sculpture garden which we introduced a couple of years ago.”

Canton Music Friends, a community group who supports music education and musical activities for local students, will serve an ice cream social during the concert as a fundraiser.

The concert is free of charge and the public is urged to attend.

There will be very limited parking on Willow Island as the musicians will be set up in the small parking lot. There’ll be an opportunity to drop people off before moving to available parking lots in Heritage Park or the Municipal Lot off Riverside Drive.

Founded in 1999, Grasse River Heritage has been working on behalf of the Canton community for 20 years, the press release said. As a nonprofit organization, it receives no tax dollars and relies on volunteers and donors to fund its projects.

During its two decades, Grasse River Heritage has focused on improving the quality of life in Canton with projects such as building Dwight Church Park, opening Heritage Park, and creating an outdoor sculpture garden on Willow Island.