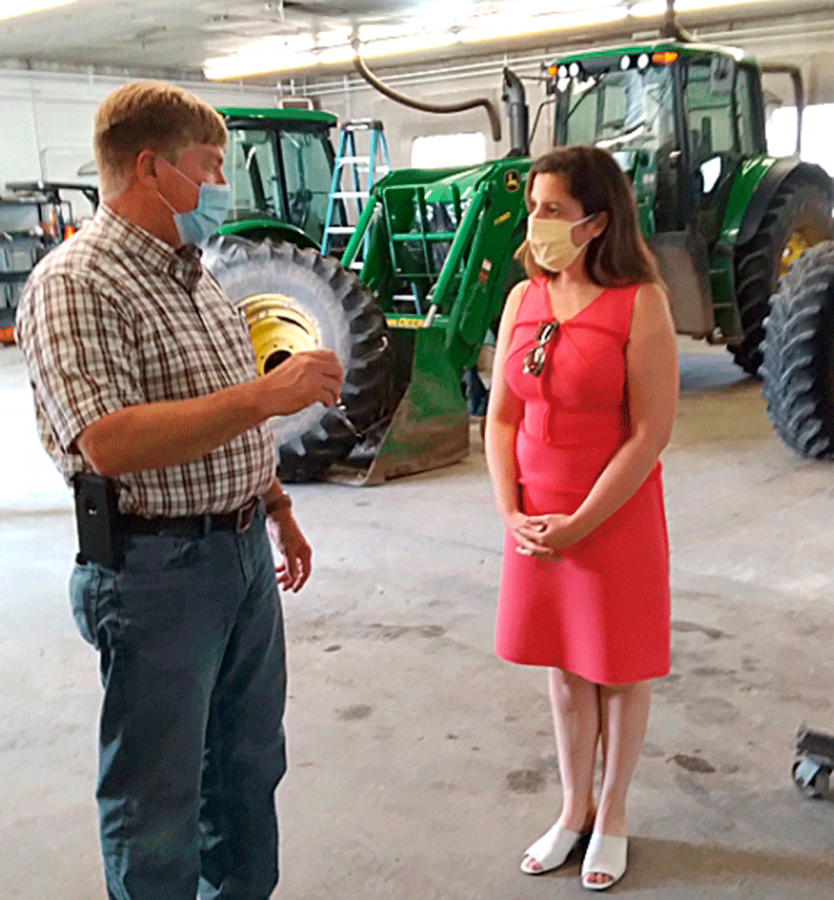 Jim Curtis, General Manager of Cazenovia Equipment, talks with Congresswoman Stefanik during her visit to Canton on Tuesday. NCNow photo.

CANTON -- Rep. Elise Stefanik toured Cazenovia Equipment Tuesday, Aug. 11, where she met with employees and heard about some of the problems the company has faced throughout the pandemic.

General Manager Jim Curtis told the congresswoman that supplies had been short at times over the past few months with import issues from China. He said something as small as a switch could delay assembly of tractors and other equipment.

“We usually have a hundred units on the floor. At one point, we were down to just two,” he said of the John Deere lawn mowers.

Stefanik visited Parishville earlier in the day to announce a $300,000 USDA rural development grant, which will help the department begin construction on a new fire station.

She said she chose to tour Cazenovia and hold a brief press conference there because they are the center of one of the county’s largest industries.

She said she has been a big supporter of the agriculture industry during her time in Congress.

“I appreciate the opportunity to be here and talk on the importance of agriculture and agribusinesses,” she said.

Stefanik, whose district includes a massive number of farms, said she understands the importance of agriculture for St. Lawrence County’s economy.

“Overall since I’ve been in Congress, we’ve passed a farm bill. We’ve fixed the Marin Protection Program, which was a disaster when I first took office. We did that to make sure it worked for some of our smaller farms,” she said. “We also passed USMCA which is a really important update in our trade agreement,” she said.

Stefanik said the trade agreement is important for farms.

St. Lawrence County Legislator Kevin Acres also attended the event and thanked Stefanik for her support of the farm and dairy industry during her time in Congress.