St. Lawrence County solar power installations up more than 500% since 2011 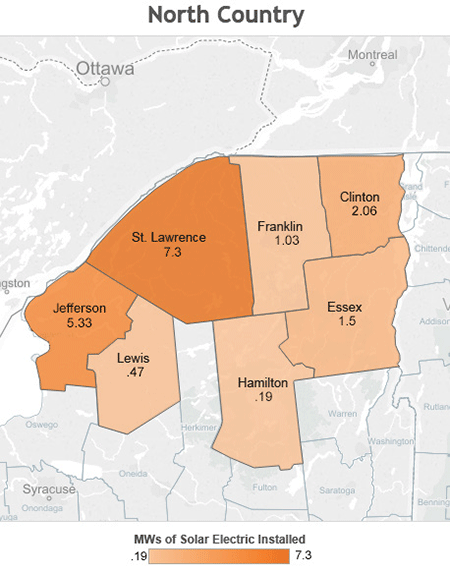 POTSDAM -- Solar power installations in the North Country, including St. Lawrence County, have increased by 525 percent since 2011 under the NY-Sun program, according to figures released recently by New York State Energy Research and Development Authority.

The North Country in 2011 saw 200 solar installations, compared to 1,250 as of 2017, according to NYSERDA's numbers. The agency calculates a megawatt increase of 1,092 percent since 2011 in the North Country overall.

Solar power statewide increased more than 1,000 percent from December 2011 to December 2017, leveraging more than $2.8 billion in private investment into New York's growing clean energy economy, said a press release from the governor's office, which highlighted the figures above.

The significant growth of solar power is attributed to a combination of factors, the press release said, including the NY-Sun Megawatt Block Incentive program and a decline in solar equipment prices and a growing solar installation industry.

"Today's remarkable milestone of 1000 percent solar growth demonstrates that . . . New York is rapidly marching towards our commitment to meet 50 percent of our statewide electricity needs with renewable energy by 2030," said Alicia Barton, NYSERDA President and CEO.

The largest percentage increase in solar power was in New York City, followed by the Mohawk Valley, Mid-Hudson, Central New York and the Capital Region, said the press release.

In addition to the more than 1,000 percent increase of completed projects, there are 1,097 MW of solar projects currently under development statewide, said the press release. If built, those installations would produce enough energy to power more than 186,000 average homes.

In that pipeline are 728 megawatts of community solar projects that will expand the market to residents who cannot put solar panels on their own homes. New York also receives on average 900 applications monthly for residential systems.

"Consumers paying for electricity are the ones who will benefit from generating energy from as many sources as possible. While our state has a diverse energy supply that come from sources such as solar, it is important that we make sure this supply is well maintained while we also seek ways to increase our renewable generation. But we must make sure that this is done at a reasonable cost to ratepayers," said Senator Joseph Griffo, chairman of the Senate Energy & Telecommunications Committee. Griffo's district includes portions of Colton, Potsdam, Norwood, Norfolk and Massena.