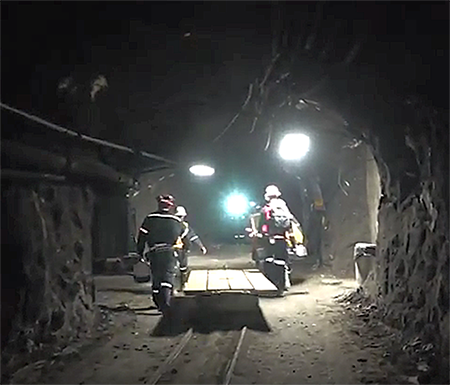 A scene from the Empire State Mine from a NYPA video on Youtube. Click the link below for more.

Local, county and state politicians attended the event which included a mine opening ceremony, tour of the surface facilities, lunch and remarks.

"The reopening of the zinc mine and the addition of 200 good-paying jobs has been a tremendous economic benefit to our community,” Gouverneur Town Supervisor David Spilman said. “I appreciate the efforts of the Governor, NYPA and St. Lawrence County in providing the resources to facilitate the reopening of the mine."

"It is great to see the mine and its operations coming back to life. I want to thank those who have worked to make this project a reality. It is a shining example of New York working to maximize its natural resources to help promote economic development in the state," said Gouverneur Mayor Ron McDougall.

"With the help of the Governor and NYPA we are capitalizing one resource, our hydropower assets, to support and develop another resource, our workforce. As a result, Empire State Mines, LLC is creating a significant number of jobs and bringing substantial positive economic impact to the region. We thank our state level partners and welcome Empire State Mines to the County," said Patrick J. Kelly, CEO of the St. Lawrence County Industrial Development Agency and Chairman of the Northern New York Power Proceeds Allocation Board.

"This is great news for the North Country. This project has created much needed jobs for our communities and will provide an economic boom to the county," said St. Lawrence County Legislature Chair Kevin Acres.

The mine, about 1.3 miles south of Gouverneur, restarted zinc mining operations in January 2018, after the completion of a comprehensive, $33 million investment by Titan Mining Corporation.

Empire State Mines began production more than 100 years ago, producing more than four million tons of zinc contained in concentrate over its history, said the company’s website. The 2,700-acre zinc mine ceased operation in 2008 due to low zinc prices, said a press release from the governor’s office.

The primary uses of zinc are for galvanizing steel, die-casting alloys and brass castings mainly for construction, transportation, and infrastructure, said the governor’s office.

The newly opened mine has employed more than 200 people thus far, and the company continues to advertise for safety and training coordinators, mine engineers and senior engineers for the operation.

The Empire State Mines project is supported with a four-megawatt allocation of low-cost hydropower from the New York Power Authority's St. Lawrence-Franklin D. Roosevelt Power Project in Massena, said a press release from the governor’s office.

In addition to low-cost power, NYPA also provided $330,000 in funding as part of a $1.2 million Empire State Mines program to train up to 60 local workers as certified underground miners. NYPA also provided the mine's restart with a $500,000 loan from its North Country Economic Development Fund, which is administered by the Development Authority of the North Country, the press release said.

To view a video about the mine, click here.

"NYPA has been very active with economic development incentives in the North Country, providing support to firms willing to invest in the area and create jobs. I'm proud to see the completion of the Empire State Mines' project and I'm now eager to see the mine operating and more North Country residents having the opportunity to work at the mine," said Judge Eugene L. Nicandri, NYPA Board of Trustees Vice Chairman and Massena resident.

"Titan Mining has been committed to re-opening this century-old mine and NYPA's hydropower and economic development funding allowed for the perfect marriage to get it done. This is a big win for the region, creating more than 200 jobs, and NYPA is proud to have been a partner in this venture every step of the way," Gil C. Quiniones, NYPA President and CEO said.

"We are thankful for the direct support from NYPA and our many stakeholders in the successful restart of the mine. We are very proud of this opportunity to create new jobs and skills-development which will serve the company and community well for future generations," Keith Boyle, Chief Operating Officer of Titan Mining, said.

"As Chairman of the Senate Energy and Telecommunications Committee, I would like to congratulate Titan Mining Corporation and the New York Power Authority (NYPA) on a job well done in securing the re-opening of the Empire State Mines,” Senator Joseph Griffo said. “Providing low-cost power and economic development support to this project, which will create more than 200 jobs at the site, is consistent with NYPA's core mission and I am so pleased to see this century-old zinc mine back in operation."

"The reopening of the Empire State Zinc mine is already having a tremendous impact on local economies in the North Country and its people who have been looking for this kind of employment opportunity,” Senator Patty Ritchie said. “I was pleased to advocate for a specialized training program at the mine specifically for people in the North Country. When I recently visited the mine, I was proud to see those efforts have already paid off, as 70 percent of its employees are from our region. Thanks to these hardworking individuals, and Titan's leadership, I know the mine will continue to grow and be successful for many years to come."

"The restart of this mine is good news for the North Country,” Assemblywoman Addie Jenne said. “The allocation of power and other financial resources will boost the regional economy through the direct jobs and the spin-off effect. This use of our unique natural resources to improve families' lives makes sense. We know the resource is here and our local workforce can handle the job. I am glad that NYPA and the Governor are supporting this effort to support jobs that make sense for our region."

Assemblyman Ken Blankenbush said, "These positions at the zinc mine are the kind of rewarding, well-paying jobs we can create when we make smart investments in effective workforce development and affordable energy. . . This is a major win for the North Country economy."