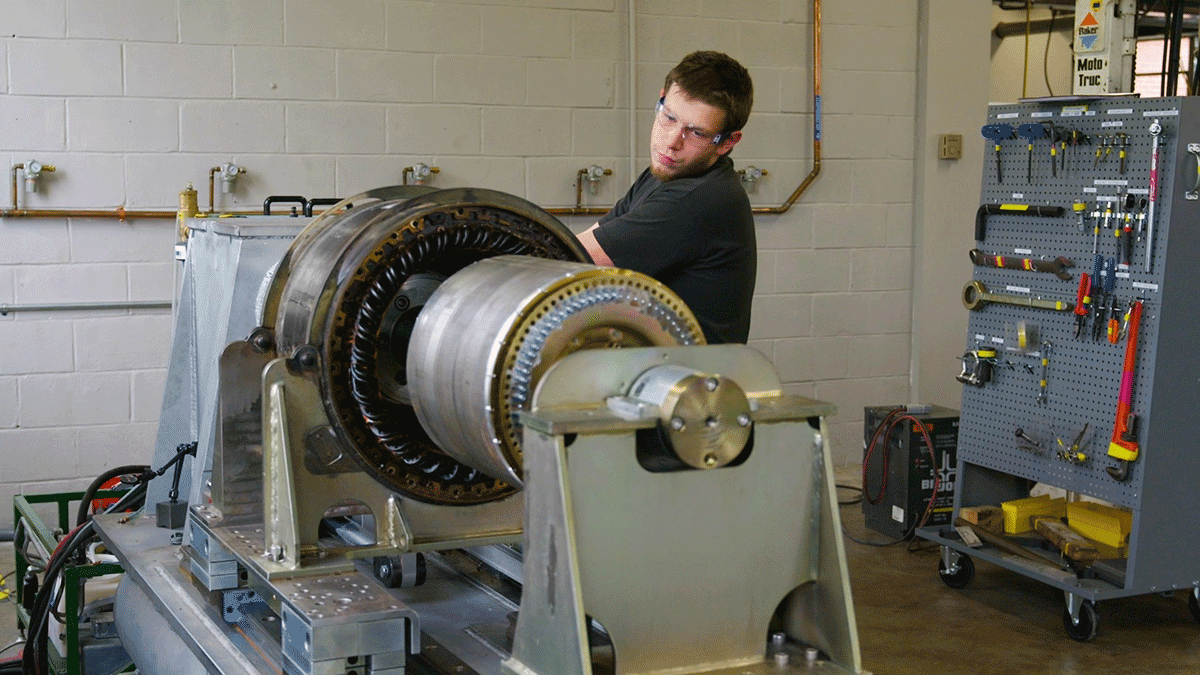 A technician at the LC Drives facility in the Clarkson University incubator space works on one of the company's innovative electric motors. Photo submitted by LC Drives.

POTSDAM — An innovative electric motor manufacturer formed and based in Potsdam wants to build a large plant here, but is mulling a move to other pastures if a partnership with the state doesn’t develop further.

LC Drives, currently based in the Clarkson University incubator complex in Damon Hall and Old Main in downtown Potsdam, produces a new form of electric motor which the company says is in high demand, especially in the marine industry and renewable wind energy sector.

LC Drives has been courting the state for an investment of up to $50 million since 2019, but the 2020 pandemic seems to have stalled progress on that.

A spokesperson for the company told North Country This Week that demand for the motors is so high at the moment that an expansion of LC Drives’ manufacturing operation is needed ASAP.

Sutton said demand is especially prevalent in the marine industry where an LC Drives electric motor can easily replace much larger, less energy efficient engines in large container ships. The retrofit with a LC Drives motor produced in Potsdam means substantially less time in dry dock for the ships. “This is industry changing for our customers,” Sutton said.

At their current location the company operates one manufacturing line that allows them to build one motor per day.

A 30,000 square foot interim facility on Route 56 would allow two additional manufacturing lines to start 18 months after breaking ground, and let LC Drives produce three motors per day to tackle some of the demand for their product.

Plans for the interim facility have been reviewed by the county planning board and are due for a review by the town planning board. LC Drives has designs to construct a permanent 150,000 foot plant at the same site by 2024 to further meet demand. Future plans include construction of global manufacturing facilities started by 2026.

LC Drives expects to employ more than 120 in 2021. The planned future expansions of their operation will end up producing about 500 jobs for the region if the company stays here, Sutton said. The jobs will be in every facet of the manufacturing process, she said, with good pay, benefits and educational benefits. Due to the company’s innovations in both the construction of the motors and the tools and fixtures used to build them, LC Drives is counting on providing extensive training for employees, and will work with local employment services and colleges to staff the spots.

However, all of that is still on the table as the company courts offers for relocation to other states and waits for New York to step up to invest in the project. And, demand for the motors is driving towards a quick decision. Sutton noted that the company is still in the location planning analysis for the 30,000 square foot interim facility on Route 56.

“The Potsdam location is not a definite thing,” she said.

Sutton said the company wants to remain in the North Country though. “We are really trying to invest in our area as we grow,” Sutton said.

“What we are really looking for is for the state to invest in 500 jobs,” Sutton said. “We are a sustainable investment for the state.”

LC Drives has had past working relationships with the state and local municipalities for incentives to develop their business. The state provided several hundred thousand dollars in grants early on in the company’s development and St. Lawrence County Industrial Development Agency helped the company access $100,000 in loans. The town of Potsdam recently approved the construction of water and sewer districts to the tune of $10 million along Route 56 which would provide those municipal services to an LC Drives proposed plant there.

Additionally, a 2019 $15 million investment from Koch Engineered Solutions is propelling the company forward with its manufacturing capacity.

An additional commitment to economic development from the state to LC Drives has still not materialized, however. Sutton said state investment will be key in the construction of the facilities on Route 56.

New York ranks number one on numerous scales by taxation watchdog groups for being one of the highest taxing states in the union for both residents and companies. The state sports similar rankings for regulations and economic freedom. All while building on what local state elected representatives have said is an economic debt in the billions of dollars even prior to the pandemic. These numbers have led over the years to what economists and legislators have called a “braindrain” as residents and companies move out to more business favorable states like Florida, Tennessee and Texas.

As the pandemic winds down and the state’s imposed shutdown of the economy relaxes, the company is hoping for more state involvement.

“We love doing business in the North Country, and our growth is explosive here,” Sutton said. “This is a wonderful place to do business.”