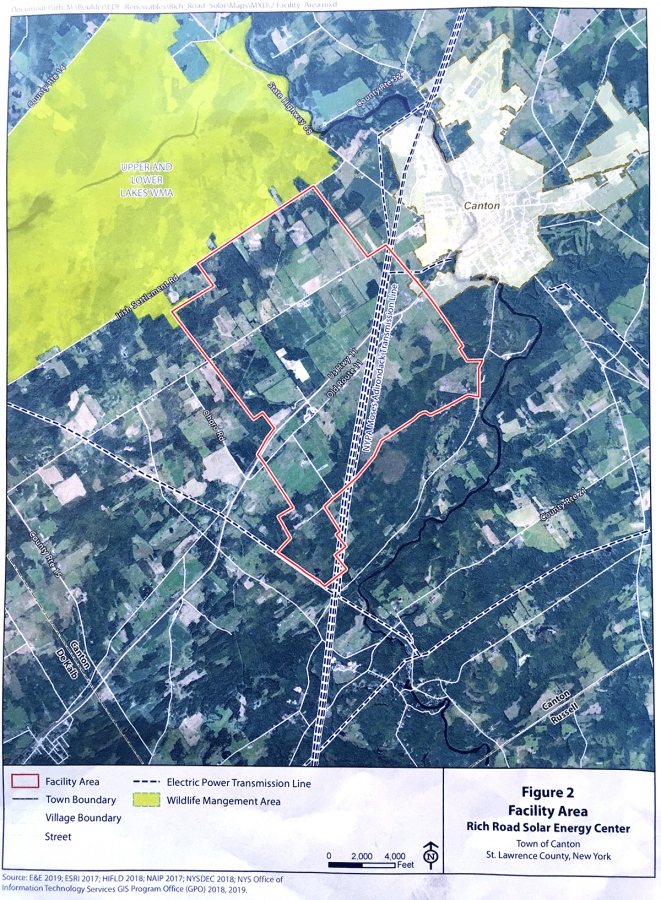 The map of the Rich Road Solar Energy Center planned by EDF Renewables. The region bordered in red on the map will be facility area, nearly 3.5 square miles, of which about 40 percent would contain solar panels. EDF Renewables | Submitted.

CANTON – Plans are underway to construct a huge 240-megawatt solar energy center just west of the village that will bring construction jobs, a payment in lieu of taxes to the town and unique opportunities for organic sheep farmers.

EDF Renewables, an international renewable energy company, has secured leases with private landowners on about 1400 acres and wants to sign similar agreements on 800 more for the Rich Road Solar Energy Center. The property owners will be paid annual lease payments for use of the land.

Once complete, the commercial energy center would be nearly 3.5 square miles, roughly 40 percent of which would be covered with solar panels. NYPA’s Moses-Adirondack Transmission Line runs south directly through the area to be occupied by the proposed center, said Jack Honor, EDF development manager, and the project’s location was chosen because of that.

Power generated from the $220 million facility would be transmitted into the grid, and sold on the open market. It would not directly power local residences and businesses.

Honor presented maps and details on the project to the Canton town board at their meeting Wednesday, Oct. 16.

The area encompassed by the energy center would straddle both sides of U.S. Route 11 and abut the Upper and Lower Lakes Wildlife Management Area to the northwest, Jingleville Road to the southeast, and almost to the village of Canton line on the northeast. Part of the southwest border of the solar farm facility area will sit somewhere between Church Brook and O’Horo Road.

The project is in the pre-application phase of the Article 10 process laid out by the NYS Public Service Commission which governs the construction and installation of energy projects greater than 25 megawatts.

“We want to engage and remain open to all stakeholders so that everyone’s voices will be heard,” Honor said in his presentation to the board. “As we go through the process there will be a lot of opportunity for public input.”

Honor said the Article 10 process allows “robust” opportunities for comment and inquiry from stakeholders and the public. A minimum of four public meetings will be held over the next 12-18 months in Canton to present the plan, Honor said.

In addition, the town, village and county would each have the opportunity to select two local potential nominees to the state’s siting board for the facility.

Before the company applies for project permits, they will submit the required public involvement statement and then the project scoping statement (PSS), a highly detailed plan of all the studies required, including environmental research. The company plans to file the PSS in about 9 months, Honor said. The application is anticipated to be filed with the state in 2021.

The state’s Article 10 process will override any local municipal permitting, Honor said, but the state does expect EDF to follow local zoning law.

Honor said, however, that final completion may not be until 2024, due to a delay in the state’s plans to upgrade the NYPA transmission line. The EDF project would require a more robust line than what is currently in place to carry the power produced by the solar facility downstate and into the grid, and the state’s planned upgrade will be able to handle that level of electricity.

But, the state’s transmission line upgrade project doesn’t yet have its permit, Honor said, which could delay EDF’s construction. “We are kind of at the mercy of them, because the line can’t handle the power right now,” Honor said.

Construction of the facility will mean up to 200 jobs for the 14- to 18-month build, many of those electrician jobs, and three to four permanent positions to manage the facility.

Honor said other benefits during construction would be the purchase of locally sourced materials where available.

Also, under the state’s Article 10 permitting process, up to $300,000 in “intervenor” funding is available during the planning and community involvement phases of the project. The funding could be used by municipalities, stakeholders and even individuals to conduct their own research and review of project specifics, including hiring lawyers, environmental consultants and other experts.

A payment in lieu of taxes (PILOT) to the town, county and school, return of land currently under agricultural exemptions to the tax rolls and the annual lease payments to the landowners are some of the long term benefits of the project.

“I wouldn’t presume that the county was just going to rubber stamp that, I’m sure there is going to be negotiation over who gets what, but that’s what we put out as what we feel is a fair number,” Honor said. Honor said EDF would advocate that the $600,000 PILOT would be split equally between the town, county and school.

In addition, all of EDF’s PILOTS would increase 2 percent each year, Honor said.

Taxes on special districts, such as light districts or fire districts, would still be paid, Honor said. “Those can’t be wrapped into a PILOT, we pay those just like any other resident,” he said.

“And, most of the land is currently in agricultural exemption, so that’s going to come off. So you will be able to tax the land at full value,” Honor said. “And we pay a 5-year penalty for taking the land out of ag exemption. . . A lot of that would go to the town.”

Honor said EDF tries to use certain strategies to keep the agricultural character of the land.

“We do use sheep for vegetation management,” Honor said, and the company doesn’t use pesticides around the panels and plants wildflowers to support local pollinator populations.

EDF works with the American Solar Grazers Association based in Ithaca. The association puts together business plans for sheep farmers and networks with companies like EDF and those farmers to facilitate sheep farm businesses using solar farms for grazing land. “We typically pay the sheep farmers a small fee for vegetation management, to keep the grass down. In exchange they get to use the land and they get to bring their fresh, organic lamb to the marketplace,” said Honor.

“For a project like this, about 1500 to 2,000 sheep could be had on the site,” Honor said. “So that might be three or four different farmers would get an opportunity to work it.”

Honor said preference is generally given to landowners on the leased land, or neighbors, who want to transition from dairy to sheep farming.

Addressing the equipment of the project, Honor said no toxic materials are used in the panels themselves, and that they would be installed on removable galvanized steel and aluminum racking systems on driven piles or ground screws. No concrete foundations would be constructed to support the panels.

A recycling plan for the worn out equipment would also be approved by the state under Article 10. Honor said the useful life of panels is 35 to 40 years.

A decommissioning plan will be in place for the energy center at the end of its life as well. All agriculturally zoned land would be returned to its original state once the center was decommissioned. 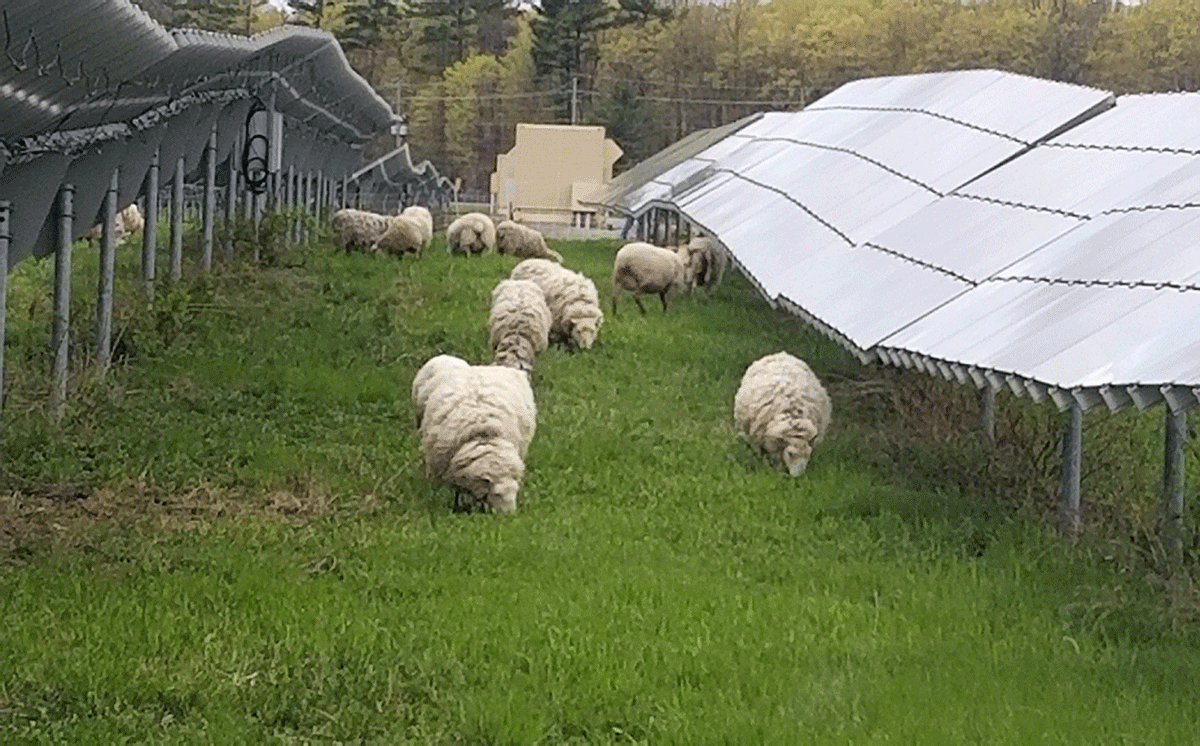 Sheep from the Shady Creek Lamb Co. in Kinburn, Ontario graze in a commercial solar center operated by EDF Renewables under a “vegetation abatement” contract. EDF pays Shady Creek to graze their sheep around the panels to keep back the weeds and Shady Creek has been able to expand its operation. A CBC story about the arrangement can be found at https://bit.ly/2pfYqR6. EDF plans to offer similar grazing arrangements to shepherds at the proposed Rich Road Solar Center in Canton. Chris Moore and Lyndsey Smith | ShadyCreekLambCo.com.