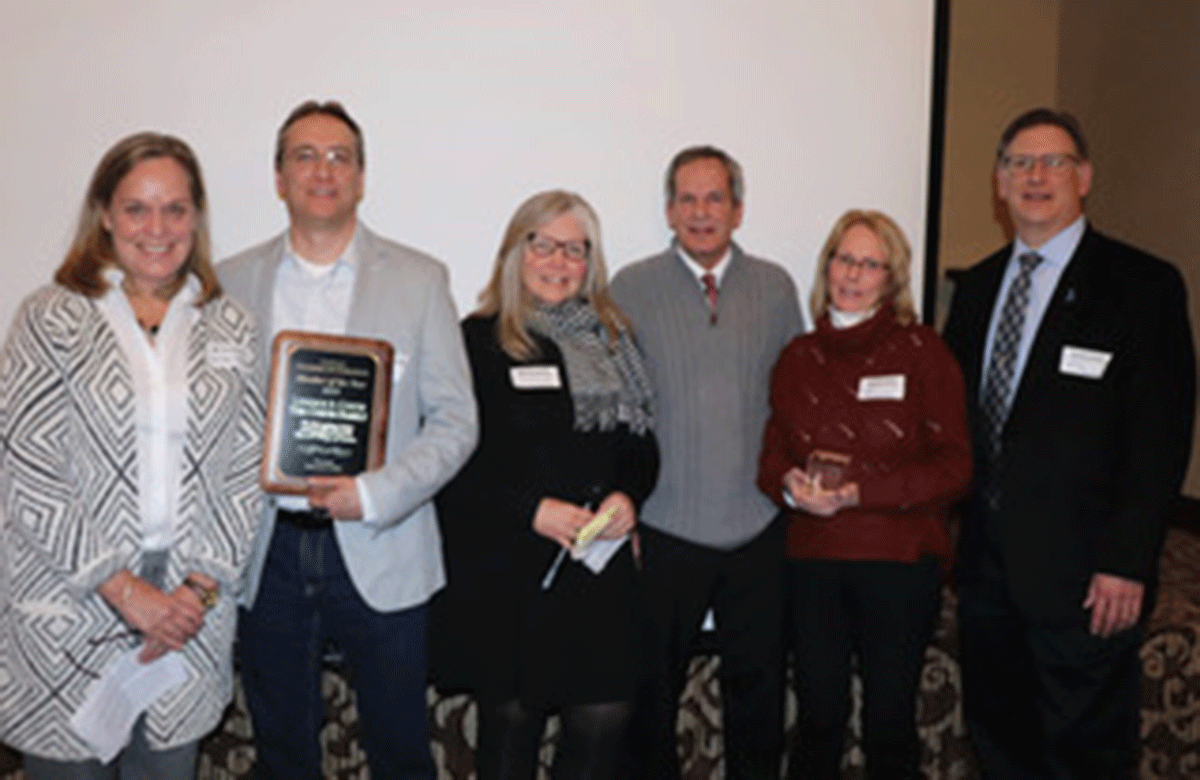 CANTON – Community leaders looked forward to the future and honored the Curtis family for their many contributions Thursday night at the Canton Chamber of Commerce celebration dinner.

“We have a lot to be proud of in Canton,” Pres. Carol Spadaccini told the more than 120 attendees at the Best Western University Inn.

The Member of the Year award was presented to LeBerge & Curtis, which has served the community for 65 years. “The Curtis family took pride in a successful business and the community at large,” said chamber board member Paul Mitchell. Darlene O’Connor, who accepted the award, said the sale of the John Deere dealership last year was “very difficult,” but the family will continue to operate LeBerge & Curtis rentals.

The Help Sami Kick Cancer Foundation, formed in honor of Samantha “Sami” M. Curtis, who passed away in 2017 of cancer at age 18, received the “Chamber Recognition Award.” Creation of the foundation and The Lodge at Dreaming Tree Ranch, where families affected by cancer can reconnect, was a “profound way” the family has kept her memory alive, Mitchell said.

Leigh Rodriguez, Canton’s director of economic development, said her office is working on expanding water and sewer lines to the Maple Hill subdivision, where Community Bank offices are located. Other upcoming projects include widening of Miner Street Road and enhancements at Willow Island to include a performance space, play area and composting toilet, she said.

Her office continues to work on the Dairy Queen reconstruction project, elevators at the senior citizen high rise and assessing brownfield areas for redevelopment potential, she added.

Canton Central School Supt. Ron Burke said voters will be asked to approve a $24 million capital project on May 19. Major items include new high school and middle school parking lots and a new regulation size soccer/lacrosse field behind the middle school so the existing field can be converted into more parking.

Also included are a new high school/middle school cafeteria and a new swimming pool and fitness center, both open to the community with a “YMCA feel,” he said.

Voters will also be asked to approve artificial turf and lights at the new soccer field. The project is not eligible for state funding, so district residents would have to pay full amount. The $1 million project is being presented as a separate proposition “to the allow the community to decide,” he said.

SUNY Canton Pres. Zvi Szafran told attendees that the SUNY Canton Foundation holds an option to purchase the former Jubilee store building downtown. The plan is to demolish the building and replace it with commercial space, apartments and an entrepreneurial center, to help “create companies” and economic “opportunities” for Canton. 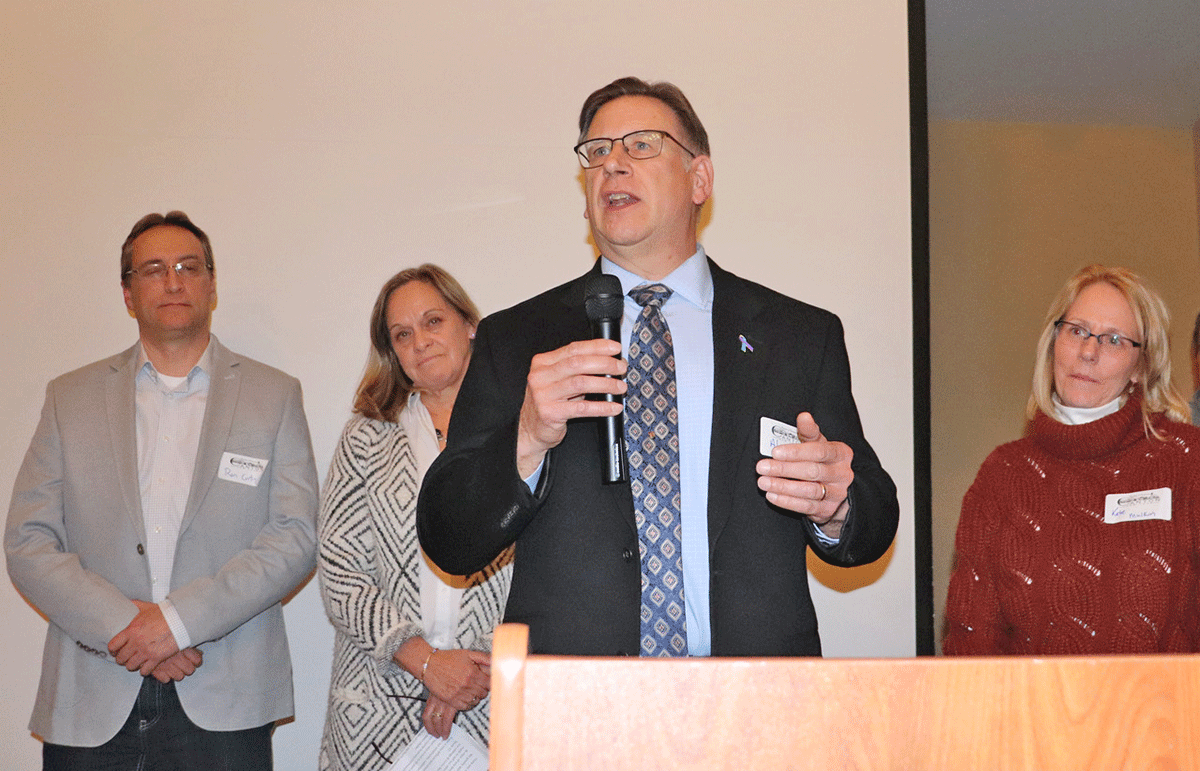 The college’s ESports program has also been a big success, he added.

Bill Shumway, publisher of North Country This Week and NorthCountryNow.com, explained how newspapers and local news websites help keep communities informed, connected and engaged. The paper is working to increase coverage and service to Canton, and initial results are positive, based on support from the community, he said.

The behavioral health facility opened last year in the former Key Bank building is “already at capacity,” he said. United Helpers has also begun offering telemedicine services to patients and employees, he added.

Laurie Vernsey, co-owner of Buster’s Sports Café, said relationships in a community such as Canton are important. “We need each and every one of you,” she said. “Without people and service, we don’t have community.”

Emcee was Michael Frazer, owner of Frazer Computer which has grown to 115 employees who provide software services to more than 21,000 auto dealers “all out of Canton, New York.” 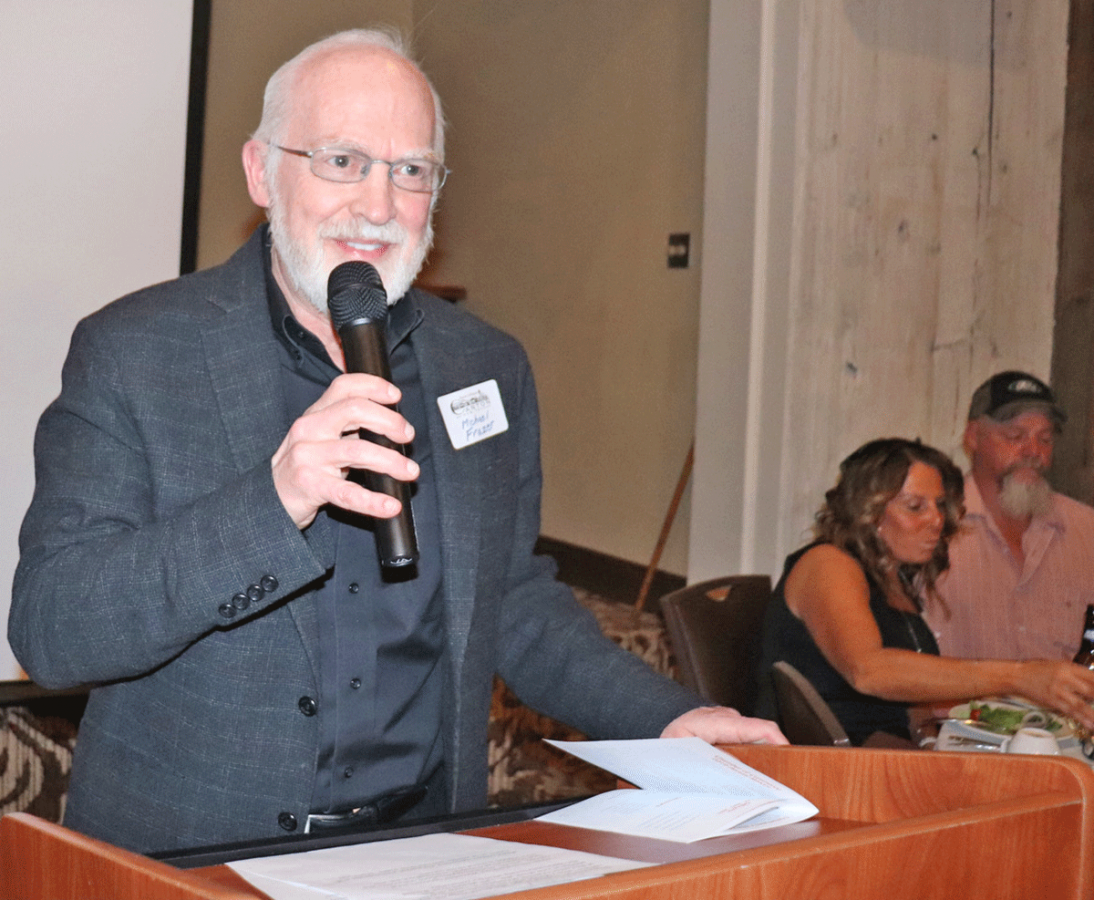 Michael Frazer, of Frazer Computing, was the Master of Ceremonies at the Canton Chamber of Commerce Annual Dinner Thursday. NCNow photo.