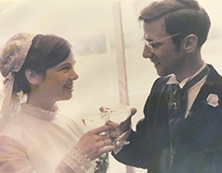 Since their wedding in Schenectady, New York, on August 15, 1970, Jean and Steve have shared a commitment to making the world a better place, grounded in their love for each other.

They resided in Chipman Corners after they were married, and Stephen served as the minister of the Scotch Presbyterian Church. It was here that Steve met Jean at an annual chicken dinner in 1969.

Jean was a teacher in the area.

Everyone who has spent time with these two has witnessed a marriage of a couple of generous and committed souls who passionately express their love through support, patience, appreciation, kindness, trust, hope and perseverance. Jean and Steve have touched lives not only where they have resided – Chipman’s Corners; Lead, SD; Clarion, PA; Portage, MI; Otsego, MI; Greenville, SC – but also where they have worked and volunteered in nearby communities and around the world.

The many members of Jean and Steve’s family as well as their friends across the country are thrilled to honor such a devoted couple on their special day. May all who have been touched by an extension of their love join us in wishing Jean and Steve a happy anniversary!