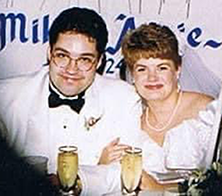 Angela is the former co-host of "Breakfast Brew with Matt and Ang" and is currently employed at Community Bank, N.A.

Michael is a musician, well known throughout the North Country having been in several different bands and currently performs with the couple's son as Margarita Mike and Tony.