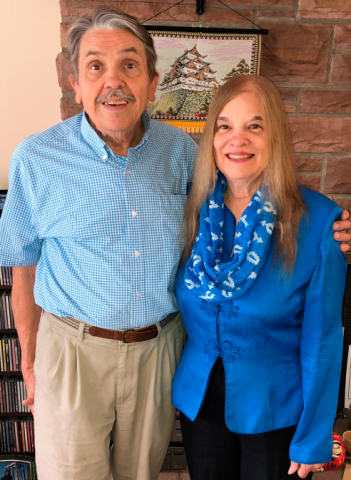 Mr. Barry III was born in Brooklyn, N.Y. He is the son of the late James F. and Ethel J. Oberhofer Barry II.

Dr. Dana M. Malloy was born in Utica, N.Y. She is the daughter of the late Daniel S. Malloy and Celia V. Sacco.

Mr. Barry graduated from West Hempstead High School in 1964 and SUNY Potsdam in 1968 and 1973. He taught high school chemistry and computers at Canton Central for 32 years before retiring in 2001. He also taught chemistry at SUNY Potsdam and in the Horizon Program at Clarkson University. He serves on the SOAR board of directors and is curriculum co-chair. He belongs to the Canton Writers Group and has written over 250 vignettes.

Dr. Dana Barry graduated from Clinton High School in 1967. She earned a B.A. and M.S. degree (in Science Education) from SUNY Potsdam, a M.S. degree (in chemistry) from Clarkson University and two doctoral degrees (one of which is a Ph.D. in Engineering from Osaka University in Japan). She also has an Honorary Doctorate from a university in Malaysia (Ansted University).

Dr. Barry is a Research Professor in the Department of Electrical & Computer Engineering at Clarkson University and works part time at SUNY Canton. She has over 300 professional /academic publications and many awards and honors to her name.

She is a member, officer, and Chemistry Ambassador for the American Chemical Society. Her name is on four Mars’ Rovers (Spirit, Opportunity, Curiosity, & MAVEN), NASA spacecrafts, and the Japanese spacecraft Hayabusa-2, the first one in the world to land on an asteroid. In addition, Dana is a member of St. Mary’s Church in Canton. She also sings and plays the keyboard and trumpet in several local music groups.

Due to COVID they are planning an anniversary party in the future.